One of the most frustrating problems of converting PDF to other digital file formats is compatibility. Ever have one of those moments? You receive a converted file which you can’t open or view, let alone edit? If you have, then you know what we’re talking about.

Converting PDFs to the right format can get more confusing because some word processors can support certain file formats, while others can’t. Then depending on the version of the application, it can get even more complicated.

If you’re trying to figure out which file format to convert to, here are a few general guidelines and some information about each format to help you make the right choice.

A .DOC file is the number format for creating general documents like essays, brochures and formatted resumes.  The format can handle mixed content very well and can be used to create all different types of printed material such as labels and business cards.

That being said, when your main focus is on sharing and making the textual PDF content editable, a standard PDF to .DOC conversion is all you need.  PDF text, graphics and tables will be transferred over into a multi-purpose document users can easily access. A few tips and notes:

The DOCX file format was released with MS Word 2007. It is now the default format for MS Word 2007, 2010 and 2013. Like the .DOC format, a .DOCX file is used for generating editable documents. The major difference is in the technical specifications of the .DOCX format, which has a hard time playing nice with other applications.

Although more suites are now getting support for the format, double check with your recipient if he or she can open a .DOCX file before you convert. Users with older MS Word versions will need a workaround to interact with the file (uploading it to Google Docs, downloading a plug-in, or converting the file), which can be a huge hassle. When in doubt, convert PDF to .DOC instead. Tips:

As the popularity of open source grows, the .ODT is fast becoming one of the main formats to work with. The vendor neutral .ODT file is OpenOffice’s native word processing format used primarily within open source environments. As such, convert PDF to .ODT when working with open source applications and users. Also, pay attention to how .ODT files interact with MS Word. By doing so, you can side-step any compatibility issues that pop up with the converted file.

A few things to know:

A rich text file is a Microsoft text file that can keep basic formatting elements like bold, underlined or italic fonts.  It can also support formatted content such as text alignment and bulleted lists. 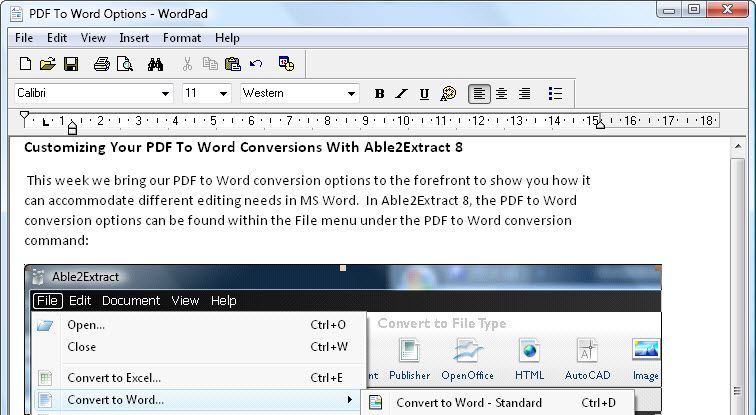 Because .RTF files are easily accessible across different platforms, they make a good conversion output alternative when problem files can’t be opened. Other things to know:

File Format Compatibility At A Glance

Below is a quick glance summary. Included are links for more detailed information about supported file versions, limitations, and downloads.

There are many other applications out there, so let us know which ones we’ve missed and if you have any other best practice advice or tips yourself.